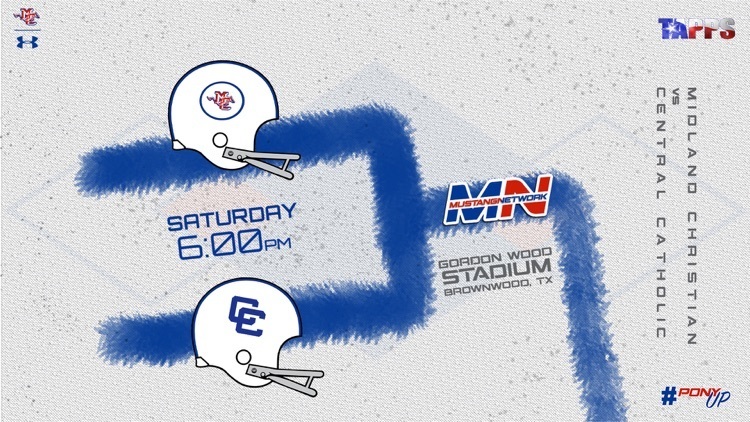 Mustangs vs Buttons for Spot in State Championship

Watch/Listen Live on the Mustang Network:

Central Catholic won the District 2 Championship after going 5-1 against the teams from San Antonio and Houston. Their only losses this season came on the road against undefeated Alamo Heights and against rival Antonian Prep. After a first round playoff bye, the Buttons defeated Fort Worth All Saints 38-28 in Belton. The Mustangs will face another high powered offense that averages 40 points per game. Central has scored 20 points or more in every game this season. The Buttons are led by Senior dual threat QB #2 Sylas Gomez. The Army West Point commit has thrown for 1,875 yards and 19 TD, and has run for 722 yards and 12 TD. In last week’s playoff game vs All Saints, Gomez completed 18 of 22 passes for 233 yards and 2 TD. He also had 16 carries for 69 yards and a TD. Senior #3 Jaxon Deason is the leading receiver with 41 receptions, 740 yards and 8 TD this season. Deason caught 7 passes for 146 yards and scored twice in the win against All Saints. The Buttons have a 1,000 yard rusher this season in Senior #21 Jonah Dunlap (139 Carries, 1,023 Yds, 13 TD). Last week, Dunlap carried the ball 24 times for 127 yards and 1 TD. On the Offensive Line, Central has two seniors that are committed to UTSA (#77 Ben Rios and #79 Deandre Marshall). The Buttons give up an average of 21 points per game. Mike Santiago has been the Head Coach since 2017 and is 28-22 at Central Catholic. Santiago was the head coach at Stephen F. Austin State University from 1999-2004 where he went 39-27. He was also head coach at the University of the Incarnate Word from 2009-2011 where he finished with a record of 10-18. The Buttons won State Championships in 2001, 1990 and 1970.

Midland Christian avenged the regular season loss to Nolan Catholic with a thrilling 42-37 regional win against one of the most talented teams in the State. Following the victory in Abilene, MCS advanced to the TAPPS Div. 1 Semifinals for the second year in a row. Ryver Rodriguez led the Mustangs against Nolan with 219 yards rushing and 5 total TDs. Ryver has run for 1,494 yards and 30 TD this season. Midland Christian’s dual threat QB has also completed 125 passes this season for 1,816 yards and 15 TD. Junior RB Nathaniel Brito tallied 110 yards and 1 TD vs the Vikings. The Brito Torpedo has run for 774 yards this season and has found the end zone 6 times. Leading receiver Sean Madison returns for the Mustangs after missing the last two games with an injury. Sean has caught 35 passes for 604 yards and 6 TDs this year. Senior Captain Jack King scored another career playoff TD with a 24 yard catch at the goal line last week. Jack is tied for the team lead with 35 receptions this season. Safety Tanner Carlisle was named TXPSFB Player of the Week after the incredible kickoff recovery, 2 INT, 8 Tackles and 1 PBU against Nolan. The MCS defense has 10 Interceptions this season and Tanner leads the team with 4. Outside Linebackers Zandan King (92 Tackles, 8 TFL) and Dawson Bullard (84 Tackles, 13 TFL) are key pieces to the Mustang Defense. Sophomore Kicker Gage Gunter is 44 for 45 on extra point attempts. The Mustangs are scoring an average of 37 points per game while giving up 23 points per game this season. Head Coach Greg McClendon picked up his 40th career playoff win last week and is looking to lead the Mustangs to their first ever Div. 1 State Championship Game. The winner of this game moves on to play the winner of Parish vs Bishop Lynch for a State Title next Saturday at 1:00 PM at Midway Panther Stadium.