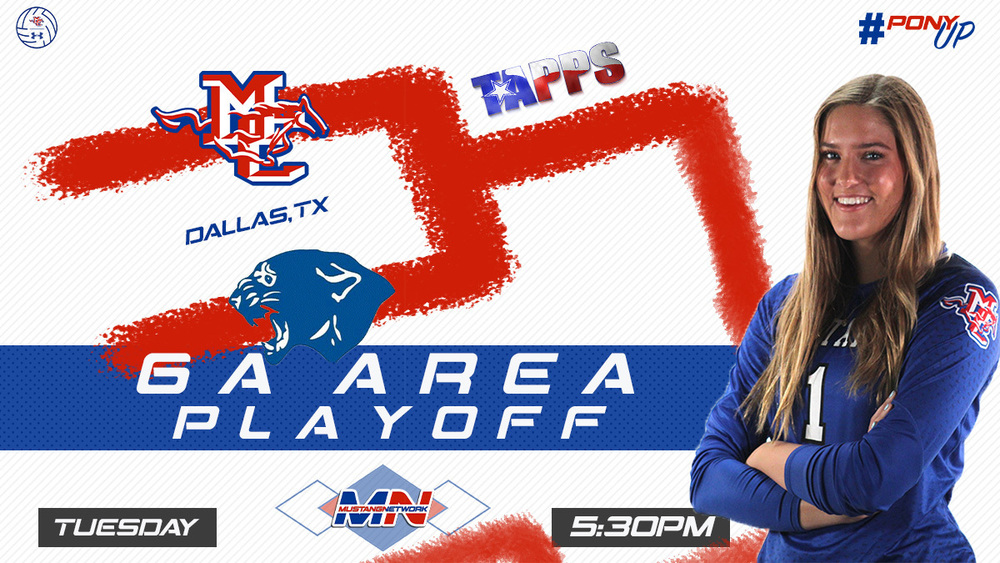 Volleyball Takes On #2 Parish Episcopal in TAPPS 6A Area Playoff

Watch Live on the Mustang Network:

Parish finished 2nd place in the extremely tough six team District 2. The Panthers split with District Champion Plano Prestonwood and split with #3 Seed Bishop Lynch. Parish swept JPII twice, and beat both TCA & Ursuline twice. Parish & MCS both faced Nolan Catholic this season, Parish defeating Nolan 2-1 in a tournament on 9/3. MCS defeated Nolan 3-1 in Ft. Worth on 10/29 and lost in 4 in Midland on 10/8. The kill leader for the Panthers is #5 Sarah Pickett, with 253 Kills on the season. #3 Trinidy Huynh leads the team defensively with 390 Digs. All around great player #2 Harper Cooper leads Parish with 421 Assists. Cooper also has 251 Kills, 233 Digs, 45 Blocks and 30 Aces. #8 Julianna Lenington has the most blocks with 47. Leading the team with 41 Aces is #12 Callie Taylor. The Panthers are coached by David Huynh.

Midland Christian needed a win in its final District match to clinch a spot in the playoffs. After losing a close first set on the road, the Mustangs responded to win the next 3 sets and defeat the #2 Seed Nolan Catholic Vikings. The Stangs swept All Saints at home and lost on the road in 5 vs the Saints. MCS lost both matches this season to the defending state champ, Argyle Liberty. The young Mustangs have been playing 4 Freshmen and 3 Sophomores this season. The only Senior on the roster is MB #1 Ella Sheppard. The 1st Team All District selection and team leader is a difference maker up front for Midland Christian. The 2021 TAPPS Sand Volleyball State Champion duo of the left handed hitting Junior #15 Rayah Coy and Junior Libero #7 Blair Dunn brings experience, energy & athleticism to the court. #4 Carter Saxton and #12 Ramsey Clark are tremendous defenders. Watch out for OH #10 Camdyn Sears, #20 Carley King, #5 Halle Gunter and #8 Molly Coco. Freshman MB #21 Aubree Lundberg will be busy up at the net. The winner of this match will move on to play the winner of Argyle Liberty vs Plano John Paul II in the Regional Playoff.